In the absence of a foolproof recipe for building a championship team, we rely on the genius of coaches to know which ingredients will come together to reach destiny.

For Darrell Royal, two of the most important components of his 1969 title team came from one of the least-likely places: tiny Wheat Ridge, Colorado.

Freddie Steinmark and Bobby Mitchell were the talk of the Greater Denver area once they teamed up in the Wheat Ridge backfield after Mitchell’s family moved in from California.  Their running styles complemented each other perfectly, turning the boys into stars whose local popularity was once compared to The Beatles by author Jim Dent, who wrote a book about Steinmark that is being developed into a movie.

Their arrival at the University of Texas in 1967 found the Longhorns in a quagmire of piling up four losses or more in three consecutive seasons.  Royal moved the high school backfield mates to opposite sides of the ball- Steinmark to safety, Mitchell to the offensive line- where both would become major contributors.

After a sophomore year in 1968 that saw Steinmark become one of the resurgent Longhorns’ defensive stars by intercepting five passes, the Wheat Ridge boys had high aspirations for 1969- a year that would mark great triumph and great tragedy for both.

In January, Bobby received word that his older brother, Mark, an Army helicopter pilot, had been killed in action in Vietnam.  Though the loss stung mightily both then and today for Mitchell, he was comforted by Steinmark and channeled his energy into winning a starting job at offensive guard that spring.

As the 1969 season began, Steinmark began to feel an increasing amount of pain in his left leg.  Though noticeably hobbled, he continued to play through the pain as the Longhorns claimed victory after victory in their march toward a championship.

With the approach of the showdown with Arkansas, both players had reason to be nervous beyond the usual big-game jitters.  With President Nixon attending the game, Vietnam War protesters made sure their voice would be heard among the hoopla of the game- providing a chilling reminder to Mitchell of his recent loss.  He would also be playing in front of his girlfriend, Honor Franklin, an Arkansas student.  Steinmark, on the other hand, just wanted to be able to endure the pain in his leg for one more game.

While Texas’ 15-14 victory was the beginning of the legendary status of many of the people involved with the game, it would mark the final football game in the life of Freddie Steinmark.  Late in the game, he finally succumbed to the pain he’d played through all year and came out of the contest.  Six days later, it was discovered he had bone cancer.  His left leg was amputated, and he stood on the sideline using crutches when the Longhorns defeated Notre Dame in the Cotton Bowl on New Year’s Day, 1970.  Just over a year later, in June of 1971, Steinmark passed away at the age of 22.

Mitchell, who would earn all-SWC honors for the Longhorns in 1970, went on to marry his Razorback girlfriend and become a successful dentist in Dallas.

To learn more about the amazing story of Freddie Steinmark and Bobby Mitchell along with the rest of the people that made the 1969 Texas-Arkansas game so unique, purchase a DVD copy of “The Big Shootout” documentary by CLICKING HERE.

Our staff at Dr. Robert Mitchell’s office all agree: We have the best patients in Texas! And now that we’ve been taking a more active and engaging presence on social media (have you liked us on Facebook or followed us on Twitter?), we want to reward our patients for spreading the word about our amazing treatments and service. 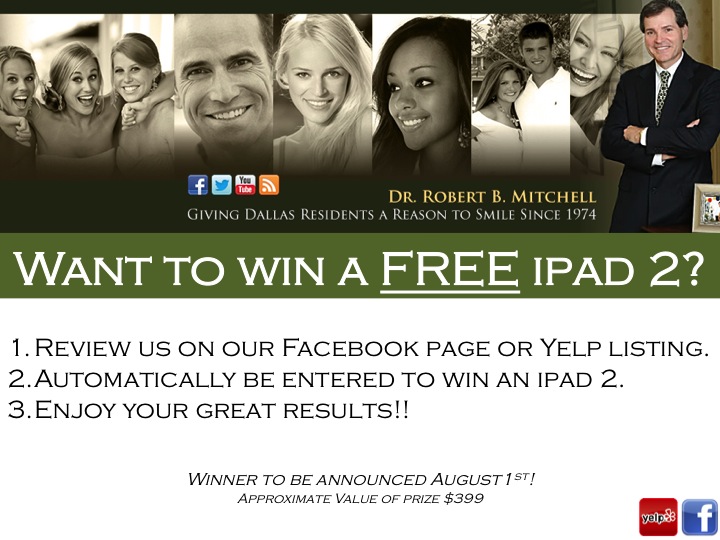 From March 6th to August 1st, we are running a promotion for a FREE iPad 2 (a $399 value!). All you have to do to enter is write a review of Dr. Robert Mitchell and share it on either our Facebook or Yelp pages.

The winner will be announced August 1, so stay tuned!

Look Your Best for that Special Occasion! 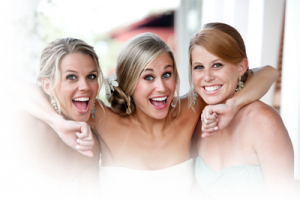 Weddings, reunions, proms and parties: This is the time of year when many of us think about ways to look our best for a special occasion. Most people think of hair, makeup and the perfect outfit, but our experts at Dallas’ own Dr. Robert Mitchell’s office want to remind you: Don’t forget about your smile! If you’re self-conscious about cracked, broken, stained, decayed or worn teeth, there are steps you can take to get the perfect smile for your big event!

A bright smile projects confidence and youthfulness. Unfortunately, coffee, tea, tobacco, wine and other substances can leave teeth yellowed and stained. Professional whitening treatments can restore a dazzling smile and Zoom Whitening treatments by Dr. Robert Mitchell can be a fantastic option.

Straight teeth create a beautiful smile and correcting crowded, crooked or open spaces between teeth can be done faster than you might think. There are a host of treatment options Dr. Robert Mitchell can provide to patients. Schedule an appointment today to talk about options like Invisalign.

Bonding makes it possible to lighten stains, close gaps and repair fractured teeth. This quick and simple procedure can usually be completed without anesthetic. Using cosmetic bonding, Dr. Robert Mitchell can enhance your smile for that special occasion.

Beautiful and long-lasting, veneers are a smart and stylish solution to the problem of cracked, broken, misshapen or otherwise flawed teeth. A simple, conservative procedure in which veneers are carefully placed over existing tooth structure, Dr. Robert Mitchell can create perfectly shaped, contoured smiles in just a few office visits. Every patient’s case is unique, and our experts can tailor wonderful results to your specific needs.

Texans, if you have an upcoming important occasion that requires you look your best, don’t hesitate to call Dr. Robert Mitchell for an appointment. We would love to help you put your best smile forward!

Resolve to have a Healthier Smile in 2013

One of the best ways to get a beautiful, healthy smile is to brush at least twice a day. But what else can you do to improve the health and appearance of your teeth? Here are Dallas cosmetic dentist Dr. Robert Mitchell’s Top 10 resolutions for a healthier smile in 2013!

Dr. Mitchell is hopeful these resolutions improve your smile in 2013! Do you have another resolution or a creative way to achieve your goals in 2013? Share it with us!